The photograph showed a young couple smiling at the camera. The man didn’t look much older than seventeen or eighteen, with light-coloured hair and delicate, aristocratic features. The woman may have been a bit younger, one or two years at the most. She had pale skin and a finely chiselled face framed by
short black hair. She looked drunk with happiness. The man had his arm round her waist, and she seemed to be whispering something to him in a teasing way. The image conveyed a warmth that drew a smile from me, as if I had recognized two old friends in those strangers. — Carlos Ruiz Zafon 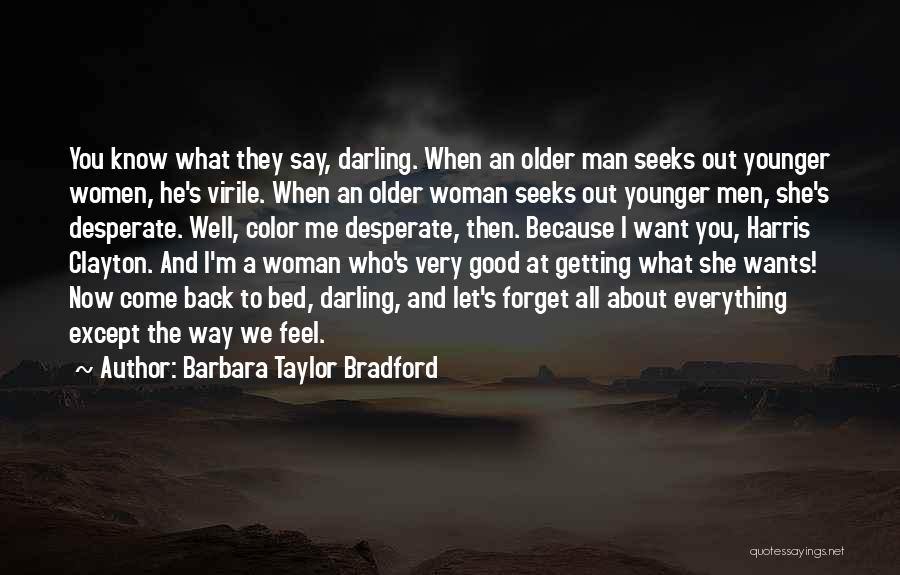 You know what they say, darling. When an older man seeks out younger women, he’s virile. When an older woman seeks out younger men, she’s desperate. Well, color me desperate, then. Because I want you, Harris Clayton. And I’m a woman who’s very good at getting what she wants! Now come back to bed, darling, and let’s forget all about everything except the way we feel. — Barbara Taylor Bradford 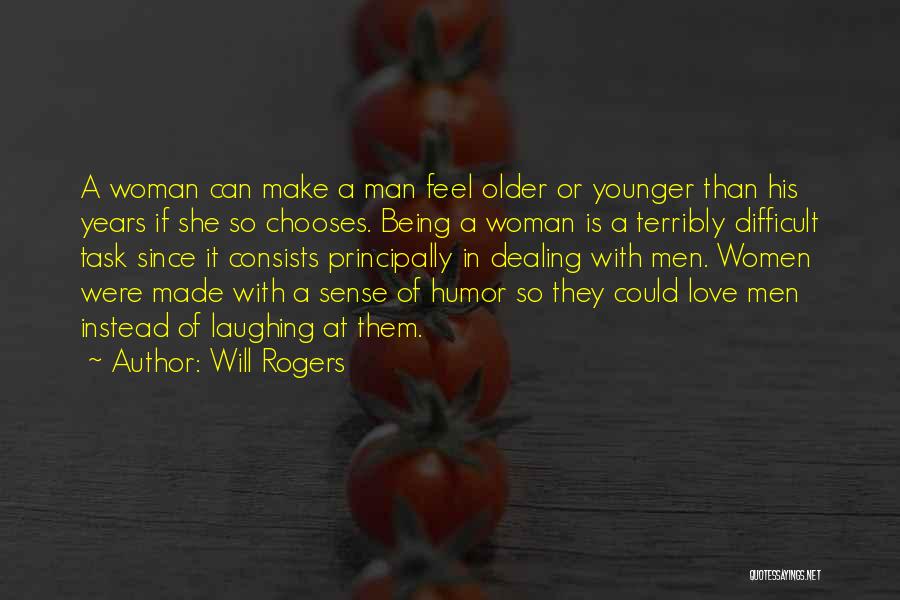 A woman can make a man feel older or younger than his years if she so chooses. Being a woman is a terribly difficult task since it consists principally in dealing with men. Women were made with a sense of humor so they could love men instead of laughing at them. — Will Rogers 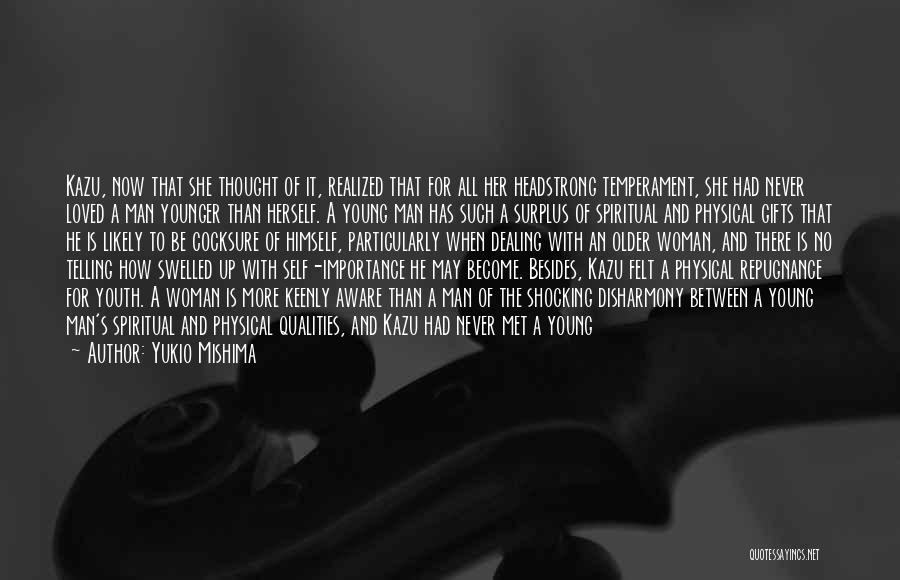 Kazu, now that she thought of it, realized that for all her headstrong temperament, she had never loved a man younger than herself. A young man has such a surplus of spiritual and physical gifts that he is likely to be cocksure of himself, particularly when dealing with an older woman, and there is no telling how swelled up with self-importance he may become. Besides, Kazu felt a physical repugnance for youth. A woman is more keenly aware than a man of the shocking disharmony between a young man’s spiritual and physical qualities, and Kazu had never met a young man who wore his youth well. She was moreover repelled by the sleekness of a young man’s skin. — Yukio Mishima 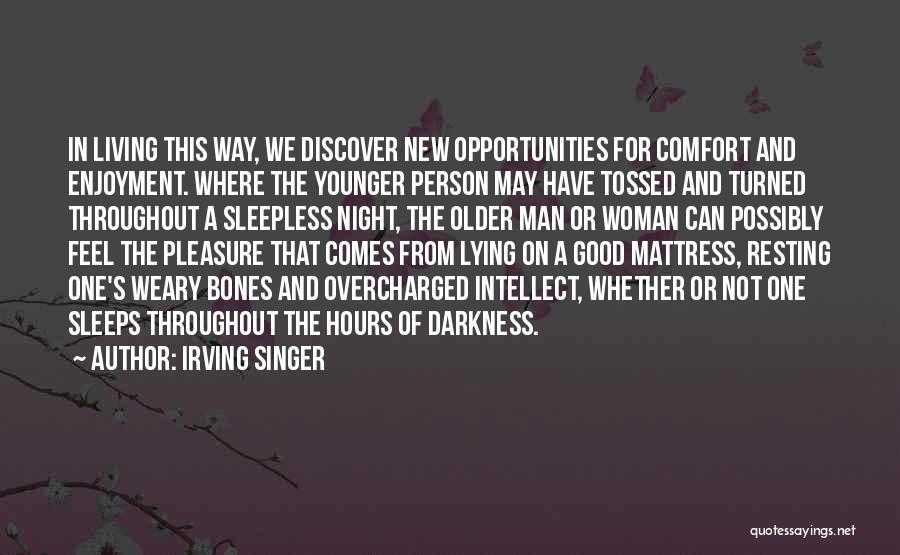 In living this way, we discover new opportunities for comfort and enjoyment. Where the younger person may have tossed and turned throughout a sleepless night, the older man or woman can possibly feel the pleasure that comes from lying on a good mattress, resting one’s weary bones and overcharged intellect, whether or not one sleeps throughout the hours of darkness. — Irving Singer The stereotype had always been that a younger man would only be interested in an older woman for her money. What else could they want? Mature women in American society were devalued; they couldn’t possibly be interesting or sexy. That was the exclusive domain of the young. Bev had never bought into that reasoning. — Crystal V. Rhodes

These girls with old gents don’t do it despite the age – they’re drawn to the age, they do it for the age. Why? In Consuela’s case, because the vast difference in age gives her permission to submit, I think. My age and my
status give her, rationally, the license to surrender, and surrendering in bed is a not unpleasant sensation. But simultaneously, to give yourself over intimately to a much, much older man provides this sort of younger woman with authority of a kind she cannot get in a sexual arrangement with a younger man. She gets both the pleasures of submission and the pleasures of mastery. — Philip Roth Funnier still how much faith her parents put in him, considering the fact that Jay would officially be younger than Violet in less than a week.
Violet was about to turn seventeen, while Jay would still be sixteen for nearly two full months/
Jay liked that, the whole older-woman thing. He also liked to joke about the fact that Violet would soon be dating a younger man.
One night, when Violet’s parents had gone out, he teased her about it, whispering against his throat, “I should probably be dating girls my own age now that you’ll be over-the-hill.” Jay was stretched out on Violet’s bed as she curled against him.
Violet laughed, rising to the bait. “Fine,” she challenged, pulling away and leaning up on her elbow. “I’m sure there are plenty of men my own age who would be willing to finish what you’ve started. — Kimberly Derting [Talking about ancient Greece](…) the great institutions (…) were created by older males who then trained younger males. They all had a strong homoerotic element. (…) This thereby increased the “rightness” of masculinity, never mind that half the world was feminine. That other half was also interested in philosophy, the arts, the law, religion, and athletics, but they had this other task -bringing children to term and nurturing them through the early years of their lives. And doing it again and again. Not that this gave status to women. On the contrary, the man’s seed made the child. A woman was simply the receptacle provided by nature to carry the child until it was ready to come out. (…) — Tina Packer

What’s with the zombie craze? Zombies are half alive, half dead, right? Sounds like my wife in bed.”
Author: Jarod Kintz